← more from
New Focus Recordings
Get fresh music recommendations delivered to your inbox every Friday.
We've updated our Terms of Use. You can review the changes here.

Mobili: Music for Viola and Piano from Chile 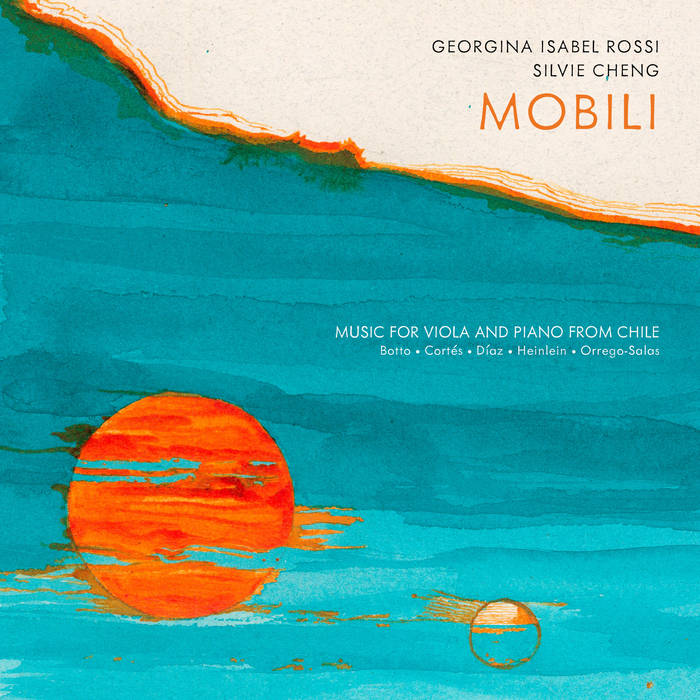 Violist Georgina Rossi and pianist Silvie Cheng’s Mobili chronicles five decades of Chilean music for viola, reflecting a dichotomy of influences from Indigenous sources and cosmopolitan aesthetics grounded in mid-century European modernist sensibilities. The collection is given added weight by the passing of Juan Orrego-Salas, the composer of the title work, sixteen days prior to the first recording session. Rossi and Cheng have dedicated the album to his memory, a fitting homage to a man who was a lifelong ambassador for Chilean music in the United States.

Rafael Díaz’ ¿Habrá alguien que en sus manos sostenga este caer? (Will There Be Someone Whose Hands Can Sustain This Falling?) opens the program and is its only work for solo viola. Taking inspiration from ritual prayers of the Pewenche people of the central Andean region, the work embodies the pantheistic ethos of their way of life in which the natural world and the deity are fused. The viola is amplified with added reverb to simulate playing alone in a mountainous terrain. The musical material alternates between melodic gestures derived from ethnomusicological fieldwork and violistic techniques that paint a meditative scene. Díaz’ second work on the album, Al fondo de mi lejanía se asoma tu casa (In the Depths of My Distance Your House Emerges), is a simple sonic recollection of a childhood memory. Diaz came up with the comforting theme to whistle as he took his daily walk to school through a pampa filled with animals, some of whom had a specific interest in the contents of his lunch bag.

Carlos Botto Vallarino was a pivotal figure in the Chilean concert music community, nationally beloved as a pedagogue, scholar, and composer. A student of Luigi Dallapiccola in New York on a Guggenheim post-graduate fellowship, Botto’s style reflects an affinity for character pieces and freely evolving structures. His Fantasía op. 15 opens with a brooding melody in the viola that is developed patiently, with supporting atmospheric piano chords that grow in intensity. Botto saves the most energetic music for the last minutes of the work, when a skittering dialogue develops between the instruments, broken up momentarily by expansive chords in the piano that recall sonorities from the somber opening.

Berlin-born, Buenos Aires raised Federico Heinlein spent the early part of his life between Argentina and Europe before settling permanently in Chile in 1940. Heinlein’s music reflects a wealth of literary points of inspiration — the Dylan Thomas reference in the subtitle of his Dúo “Do not go gentle” is consistent with that component of his work. Heinlein’s duo begins with taut declamatory phrases, displaying a discipline in its approach to motivic development that hearkens to late German romanticism. A lyrical second thematic area smooths the angular edges of the opening material. After a return of the opening, a virtuosic coda closes the work with fanfare.

David Cortés’ Tololo, one of the two works on Mobili written within the last decade, is a musical homage to the Coquimbo Region north of Santiago where he grew up, and to the astronomical wonders one can discover in its night skies. Cortés establishes a metaphor between his treatment of material and the way a telescope obscures and reveals visual information when zooming in and out. Establishing the low C string of the viola as a central pitch, Cortés builds layers of activity and tension above it, with glissandi on double stops that create microtonal beatings, left hand pizzicati, and evocative trills. The piano shadows the viola’s malleable gestures, subtly asserting the equal tempered framework around which the glissandi melt from pitch to pitch. The meditative quality of the work is broken briefly for a mischievous passage led by staccato scales in the piano about three quarters of the way through the work before we hear the opening material once again to bring the piece full circle.

Juan Orrego-Salas’ four movement work Mobili is focused and economical. The thoughtful, deliberative music in the opening movement, “Flessibile,” is occasionally interrupted by a forceful descending gesture in the piano. “Discontinuo” is more jagged, with playful interplay between the instruments. “Riccorente” unfolds as a slow march, with an initial piano melody over delicate viola pizzicati growing more rhapsodic as the melody switches instruments. An extended viola solo passage contains the most poignantly expressive music in the work. The final movement, “Perpetuo,” is vigorous and propulsive, closing this exceedingly well balanced work.

Mobili documents a rich repertoire for viola and piano from Chile, demonstrating not so much a national compositional style, but instead a constellation of influences from European modernism, to Chilean Indigenous music, to aspects of Chilean life and its landscape. Georgina Rossi’s impeccable precision is matched by a penetrating expressivity, complemented beautifully by Silvie Cheng’s sensitive performance in music that most often presents viola and piano as equal partners. Mobili is a warm and compelling invitation to discover more music from Chile, by these excellent composers from Chile and their forebears and successors.

Georgina Isabel Rossi is a Chilean-American classical violist currently living in New York City. Her recent album, Mobili: Music for Viola and Piano from Chile was released in October of 2020 by New Focus Recordings and praised by the press as “expertly played” (WQXR), “a startling new recording” (CVNC), and “one of my favorite discoveries of the year” (KDFC’s Brian Lauritzen). ... more

Bandcamp Daily  your guide to the world of Bandcamp